Is COVID 19 More Deadly Than I Thought? 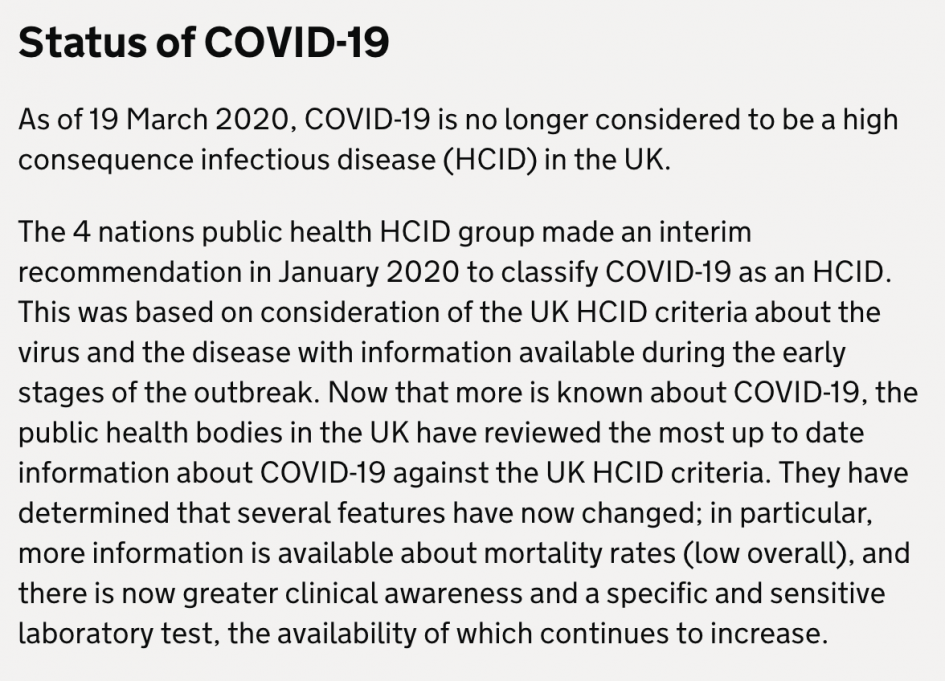 For many weeks, COVID 19 has been dominating the news. And there seems no end in sight to this. Since it is a new virus, many things are not known, and so we are hearing a lot of speculations about what we are dealing with.

I have made my contribution to this speculation in an article three weeks ago, in which I argued that this new virus does not appear to be a lot more dangerous than the flu. Since then, we have seen more data coming out, and there seems to be a consensus that it really is significantly more deadly than the flu. So was I wrong with my assessment? Did I underestimate the lethality of this virus?

Let’s test it. I remain unconvinced. I don’t see how the data that we are seeing justifies the conclusion that we are dealing with a killer virus.

The reason why many continue to believe that this virus really is a killer is the horrible numbers we are seeing out of England and New York. As I write this, over 20000 people are reported to have died from the virus in the UK, and over 17000 in New York. New York has of course less than 1/3 of the UK population.

If we take these numbers as true, then we can notice that at least in New York they seem to suggest that significantly more people are dying of this virus than the flu. In the UK the numbers are at least approaching the highs of a bad flu year, although they are still a long way from being multiple times of it.

But there are questions about these numbers. The first thing to note is that, in order for the virus to really be the cause of death, the patients should have not died without it. This, however, is not considered in these statistics. Everyone who tests positive for the virus and dies ends up in the corona death statistics.

So if someone, for example, is at the very end of a cancer disease and dies, and that someone shortly before his death tests positive for COVID19, he is a COVID death, even though he clearly died of the cancer. This is the true story of the first COVID dead in one of the states in Germany, Schleswig-Holstein.

We need to know how many people are killed by the virus. But the way COVID deaths are counted at the moment does not give us clarity about how many people get killed by it. And as far as I know, this is true for all countries. If a virus is the actual killer, then we should expect it to kill a similar amount of people in similar samples of the population. If, for example, a virus has a case fatality rate of 1%, then that means that 1% of the people infected with it will die. So for every 1 million infected, we would expect to see around 10 000 deaths.

Of course, not all populations are the same. Populations in different countries can be poorer or richer, older or younger, more or less exposed to bad environments, have different climates, and different access to medical services etc. All that can have a significant effect on the case fatality rate. But in similar populations the same virus should kill similar amounts of the infected. That means in order to judge how dangerous the a virus is, we need to know its case fatality rate.

Leaving all the media noise of the virus aside, we have studies that examine exactly that. One of the first studies was one by French researcher who compared the number of people dying with other corona viruses in hospitals to the one dying with the new corona virus. The result of that study was that COVID 19 looks very similar to the other known ones.

Although there are problems with the study, this was quite good news, and a reason to not be too worried. As a consequence, the UK even put the virus off the list of high consequence infectious diseases. That was on the 19. March, a few days before the government declared a lockdown.

Since then we have got other studies. Prof Hendrik Streeck conducted a study that sample tested over 1000 people in Gangelt, Germany. The result was that about 14% of the people in that community were believed to have been infected with COVID 19. That results in a case fatality rate of 0.37%. This was obviously a very small sample size, in which individual deaths can make a big difference.

We have other such studies. One bigger one was conduced by Dr. John Ioannides from Stanford University, who is one of the most respected epidemiologists in the world. His study tested 3300 representative people in Santa Clara county California. The result was that the new corona virus has an estimated case fatality rate of 0.1-0.2%. This would make it similarly deadly than seasonal Influenza.

There are other studies like these. Whenever the topic is approached in a controlled scientific way we get the result that at most the virus has an overall case fatality rate of 0.4%, but probably more similar to Influenza.

Now, some people will say that that cannot possibly be true. We are seeing a lot more deaths than that in places like New York. The case fatality rate has to be higher. But that would be the wrong conclusion to draw. The mistake here is to prioritise bad data over good one. The scientific studies are clearly better data than the death statistics coming out of New York.

Remember, the cause of the death is not carefully determined. And of course there are many other things that can kill people other than COVID 19. We need to know what kills people, if we want to prevent deaths.

For example, hospitals are known to be dangerous places. They are places in which one can catch many deadly infectious diseases. So, depending on how good the hospital is, people might go into hospital with COVID 19, but what kills them is another infectious disease.

Another possibility is that we are seeing a wrong treatment of patients that will then decrease their chance of survival rather than increase it. It is also possible that some places are simply more liberal in attributing deaths to the virus than others. That is possible since no one is currently carefully examining how people really die. The CDC guidelines in the US, and the WHO even explicitly say that pure association with the virus is enough to qualify as a COVID death. So not even a test is required, a policy clearly designed to inflate the numbers.

And of course, we must not forget how devastating lockdowns are. There are certainly many people dying from postponed operations, general lack of medical treatments other than COVID 19, depression, violence at home etc.

Many things are known to weaken our immune system. At the top of the list are stress/anxiety and social isolation. These are of course two important factors made worse by policies like the lockdown. And we are doing these policies at a time when presumably people really need a strong immune system, madness.

But, I don’t now what exactly is happening, it is difficult to tell. What I do know is that COVID 19 seems unlikely to be the real cause of many of the death we are seeing in certain places like New York. Rather then assuming that New York falsifies the scientific studies, the more reasonable conclusion is that the scientific studies falsify the COVID death statistics of New York. These studies are not the only reason why I believe this to be the case, however. Another one is that we are seeing vastly different death rates in different countries.

EuroMomo is the website that documents the deaths in each country in Europe. Looking at the data, one can clearly see death waves every winter that can be attributed to the seasonal flu. For similar countries, like Germany, the UK, Belgium, Austria, France or the Netherlands, we see very similar flu waves. The effect of every virus can of course be slightly different in different places, but since these countries are very similar, we tend to see very similar flu waves.

Not so for COVID 19. There are huge differences between those countries, and that although they have had very similar policies to combat this virus. Some countries, like Germany and Austria have no waves at all. In fact the numbers are negative, meaning less people than normally are dying there. Others, like France, Belgium, the Netherlands and the UK have quite large waves, that even exceed some previous flu waves.

How can that be, if we are dealing with the same virus? Non of the health care systems where overwhelmed so far. Germany even had the virus earlier than others, like the UK. The wave in England is particularly impressive. While most of the other badly hit countries in Europe maybe exceed previous flu peaks by 50-100%, England exceeds it by almost 500%. Twice as much as the second worst. Only Belgium and Spain are higher than 100%, but do not exceed 300%.

What is the reason for these differences? This simply cannot be explained with the deadliness of the virus, which should have caused very similar waves in these very similar populations. There has to be other factors at work. Which ones I don’t know, but I do know that viruses do not behave like that. The extreme outlier of England actually makes me suspicious that they simply do not count the deaths correctly in this country. They might be counting certain people 2-3 times.

As I said in my previous article, that is not to say that the virus is harmless. The flu kills many people. If these kind of viruses, for example, get into a care home then that can result in a lot of people dying. So there is something to be said for protecting certain groups of people for a while, if they wish to be protected.

It seems that most people are not open to the possibility that what we are dealing with is essentially a flu virus. We are social animals, and as such we are prone to test our believes on what other people think. To most people it is unimaginable that a whole society can be so wrong, that all this sacrifice has been because of something we usually don’t worry much about.

The insight that we are dealing with a flu virus is important, however. It means that if we are seeing more deaths than something else is killing these people. This might even be the policies we put in place. But whatever it is, we need to know what is going on in order to prevent people from dying.

Governments throughout history have made huge mistakes that ended up devastating societies. If our harsh policies are ending up doing more harm than good, or even ending up being entirely destructive, this would not be unprecedented. Governments are pretty much designed to get it wrong, and they are not designed to correct mistakes. But we need to correct this mistake sooner rather than later. The longer this goes on, the more people are going to suffer.

If we step back a bit from the emotional reporting, and observe the real data we have, there still is no reason to panic, and there certainly is no reason to give up our most fundamental freedoms to a police state. The latter is never justified, even if we really dealt with a killer virus. Freedom is the best problem solver we have.