Brian Micklethwait On How To Argue For Liberty 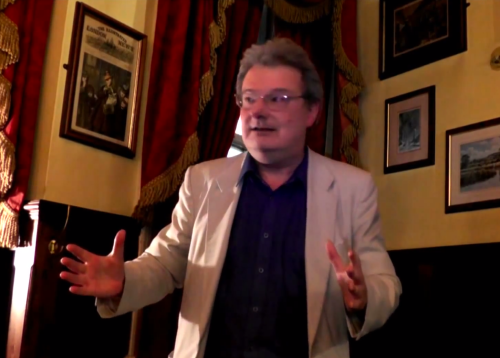 Throughout history, there has been more and less free societies. People have always fought for freedom. But even in the examples of relatively free societies, there never seems to have been a point where we could lay back and declare victory. It seems that as soon as the fight for freedom stops, the forces of authoritarianism win back territory.

Overall, true liberty seems to be more the exception than the norm. Sure there were always people who were free, but there are not many examples of societies in which at least most people were politically free.

In my own lifetime, there have been different degrees of freedom in the countries I lives in, Germany and the UK. There were times when I became somewhat optimistic, but overall there appears to be a disturbing trend towards less freedom. This trend was turbo charged in the last year since the Covid crises hit.

That is why, now more than ever, it is important to reflect on why we loose our liberties. Why is it that it is so difficult to have a free society? It seems that one of the key problems is that arguing for liberty is not easy.

Brian Michlethwait has been a giant in the UK liberty movement. He has promoted a free society for decades. In a talk he gave to the Libertarian Home almost a decade ago, he outlined the difficulties of promoting liberty, and possible solutions for it. The talk is still on Youtube, and very much worth watching.

Brian argues that liberty on the surface is actually a very simple idea. You leave me alone and I leave you alone to live our lives as we please. Sure, in order to make that work we need to find a way to determine where my liberty starts and where yours ends. The solution is certain forms of private property. The devil is of course in the detail. There might be many specialised questions that need to be asked. But those questions only come up in a small amount of special cases. By and large the idea of liberty is actually quite simple.

Yet, despite it being such a simple idea, it is difficult to convince people that, in its radical form, it is a good idea. Brian points out several reasons why that is. The most important one is probably that people are scared of liberty. Liberty comes with responsibilities, and people fear to be responsible. It is easier to follow orders than to have to make one’s own decisions.

That even applies to simple choices. In a free market, everyone usually has a lot of choices for the same product. For example, in the UK, I have the choice between many different phone providers, all of which offer slightly different products. If I want to sign up with one, I will need to look deeply into what they are offering. This can be time consuming and confusing. It might cause some people great distress.

And yet, even if someone didn’t want to look carefully into each option and just pick any, he would still be better off than if there was only one provider. Everyone can piggyback on the fact that all these providers are in competition with each other and that some people will do research to pick the best. However, this process is not perfect. There is still a lot of room for mistakes and out right fraud. Interestingly, the fact that it is not perfect, then makes many people doubt that liberty is the right solution. They overlook that, while imperfect, there is nothing better than liberty available.

This leads to the absurd situation in which liberty needs to be perfect to be accepted. The alternatives to liberty, however, never need to be perfect. Far from it. Even if liberty is 90% great and the alternative 80% failure, many will still argue that we should not have liberty. At least in the 80% bad option one is not responsible for the mistakes.

On the plus side, we have won the argument when it comes to phone providers. People still remember the disaster of only having one provider. But the argument holds for more scary problems too. To apply it to something current, we see this very clearly in the Covid crises. “Oh my god, a killer virus in going around, we need governments to safe us all”. The idea that one is left alone with the virus, making one’s own decisions of when to isolate and what mask to wear is super scary. Much better to let the government take responsibility for it.

The evidence is mounting up that letting the government solve this problem is actually resulting in a lot more people dying than if we had let people make their own decisions. But that outcome does not matter. If we had allowed liberty, some people would have died. We would not have had a perfectly safe world. The fact that now more people are dying and the world is even less safe is strangely not a very good argument. At least the responsibility now lies with someone else. And the people in charge are trying, they have good intentions, so all is well, even though nothing is. It keeps the illusion alive that a perfect world is possible.

That plays into another great point Brian makes. It is not immediately obvious that authoritarianism does not work. Often, it seems to work at first. Brian calls this the alpha graph. The government ordering people to stay at home and to wear masks appears to at first result in some visibly good changes. People were indeed less outside and reduced their contacts. In addition to that, many experienced a nice sunny holiday, not unpleasant at all. There were even, as there always are, some real winners, who were better off. A lot of those will praise the government.

What is overlooked however is that, even if the sole aim is to defeat the virus, it was not clear whether this was the correct way to deal with the problem. There are two major issues with the authoritarian solution. On the one hand there is no mechanism to change cause to correct mistakes. On the other hand lots of unintended consequences are not immediately apparent. As Ludwig von Mises pointed out, central planners cannot have all the information they need to make good decisions. It is only later that it becomes clear that the immediate visible changes do not lead to better results. Most likely the results will be worse.

Brian makes a very good point that it would be much easier to argue for liberty, if the bad consequences of authoritarianism would be more immediately visible. That way, these policies could be stopped from the start. It is much more difficult to end them later, when a lot of capital has already been invested in them. But that is unfortunately not how the world works.

Finally, Brian gives some advise from his long experience of how to bring people around to a libertarian viewpoint. First, it is important to realise that arguing for liberty is complicated, despite the fact that the actual idea is simple. There is not just one argument that needs to be made, but many. The objections to liberty are very individual. Most people believe that some freedom is good, but almost everyone has their favourite policies where they really think liberty does not work. Actively arguing for liberty is therefore a complex and time consuming battle. That of course does not mean that one should not engage in it.

Brian, however, thinks that there is a better solution. More productive then to get into endless arguments with people is to simply hold up the flag. Describe libertarianism and let people come to you. Arguing with people can alienate them. But if they come to you then they think it is kind of their idea.

I think he is right about that. Sure, with some people, arguing endlessly can be a good thing. But most of the time, people need to be motivated to listen to you. That is why it is better to wait for them to be interested rather than to beat them over the head why they need to be libertarians. That just makes one look like an unsympathetic fanatic.

Do watch Brian’s talk. It is very informative. We need to convince more people that liberty is the right choice. And we are approaching a point where people might be interested to listen.